Guide The Third Plate: Field Notes on the Future of Food

It all needs to change, and Barber has written a provocative manifesto that balances brave originality and meticulous research. His food is farm-to-table; his eloquent, impassioned book is farm-to-heart. This book uses its ingredients—the insights of some of the finest farmers on the planet—to fashion something entirely new: a recipe for the future. Read An Excerpt.

The Third Plate: Field Notes on the Future of Food [Paperback]


Download Hi Res. LitFlash The eBooks you want at the lowest prices. Read it Forward Read it first. Pass it on! He challenges everything you think you know about food; it will change the way you eat. If I could give every cook just one book, this would be the one. His vision of a new food system—based on diversity, complexity, and a reverence for nature—isn't utopian. It's essential. I was wrong. Dan Barber will change the way you look at food. I told him that he made vegetables taste almost fresher after he had prepared them than when the farmer harvested them.

Now I am equally impressed with his writing.

Food has stories and Dan tells the stories as well as he cooks. If you want to know about food, read this book. In elegant prose, he argues persuasively that eating is our most profound engagement with the non-human world.

The third plate : field notes on the future of food / |

How we eat makes us who we are and makes the environment what it is. I heard about this book while there and got it straight away. The seed portion was my favorite, so you end on a high note. Just today I bought some Anson Mills graham flour discussed in the book and got my mom to make those biscuits. Yes, we ate them all in one sitting.

This week, my newsfeed had a trailer for a documentary that apparently blasts some of the leading environmental organizations for failure to rail against hamburgers. Several other headlines informed me that eating beef results in more greenhouse emissions than driving a car, apparently extrapolating from a study recently published in the journal Climatic Change. And Elizabeth Kolbert writes in the New Yorker of her week-long experiment with the trendy paleo diet and laments the damage so much meat eating could have on the climate.

Never in human history have we been presented with such an an abundance of food choices as at the average U. 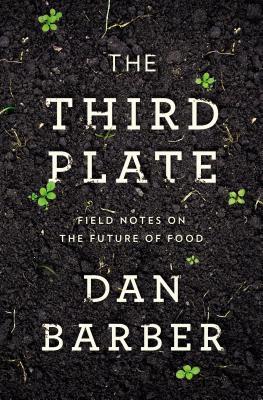 As Dan Barber reminds us in The Third Plate, only a few generations ago, human diets were largely restricted to what the local region produced. Cuisine and culture were intrinsically linked to place.

In recent years, the farm-to-table movement featuring prominent chefs such as Mr. Barber, has sought to reacquaint diners with the sources of their food.

The Third Plate: Field Notes on the Future of Food

Farmers' markets have proliferated and the term"locavore" is in the dictionary. In my small town, several restaurants proudly list the nearby farms and producers contributing to their menus. Yet the resulting "second plate" of farm-to-table goodness still closely resembles the "first plate" it aimed to replace, which at the American table is meat-centric and flanked by a limited supporting cast.

Barber envisions a "third plate" representing a sort of nose-to-tail for the whole farm, incorporating and starring crops that currently may not be beloved, or even known, to diners but are important to the ecology of the land. Chefs, he says, can use their skills to create demand for these oft-discarded goodies, from the bycatch of tuna nets to the cover crops of wheat fields.

Few chefs are better positioned to expound on this than Mr. Barber, who incorporates a farm and educational center as part of his flagship restaurant north of New York City. Nearly all of his journeys to investigate spectacular foodstuffs result in an experimental planting or livestock introduction at the farm, and the mouth-watering prose in which he describes these experiments may have some readers vowing to never again cook polenta until they, too, can get their hands on some Eight Row Flint corn.

If this planet is to support 9 billion humans by mid-century without absolutely devastating every other species, we must get over our predilection to "eat high on the hog. Barber, thankfully, is an immensely talented chef who refuses to sacrifice flavor for virtue, and he makes a convincing case one I wish I could taste for myself at his restaurant that such a compromise is unnecessary.

Highly recommend! Should be mandatory reading at every culinary institute and food science program in America. Fertilizers used and other natural disasters occur. Educational to learn of what crops will put nutrients back into the soil and the cows get an extra energy boost from the crop.

Loved the very descriptive details of the land.