Read PDF Safety-I and Safety-II: The Past and Future of Safety Management 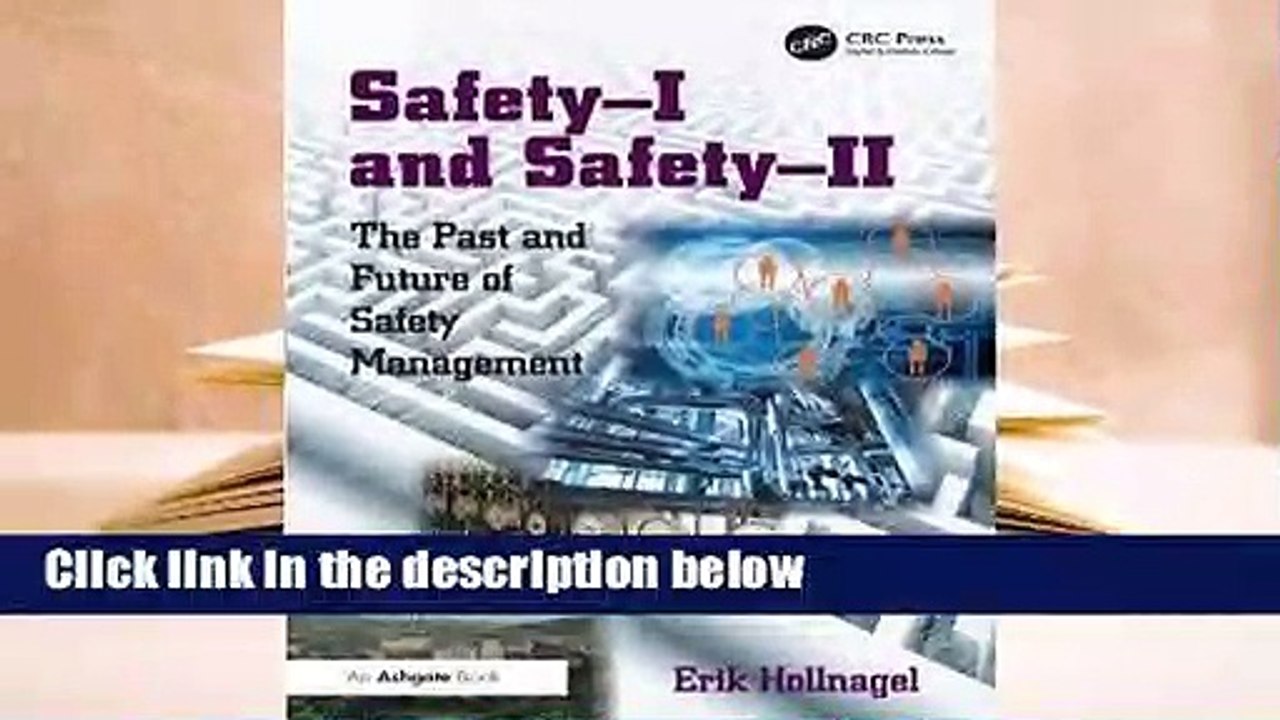 These include Science 1. The concept of Web 2. These seem to resonate with Safety-II. In its early days, the concept of Web 2. Safety-II may also be subject to this sort of zealous hop-on bandwagonery, especially dangerous with scant reading more commonly associated with scorn; see What are you reading for? Like Web 2. A key difference, however, is that Web 2.

The bursting of the dot-com bubble in late , and the emergence of Google, Wikipedia, flickr, Gmail, Google AdSense, BitTorrent, tagging, blogging and participation, redefined what the web was and how it worked. In the case of Safety-II, the redefinition was called before safety management practice had changed. When compared to the web and most activity , safety management is incredibly conservative. We would have had to wait for a long time in order to call Safety-II on the basis of its observation in the wild. While aspects of Safety-II existed in sundry practice, the more holistic worldview did not, and so there was no significant and coherent shift in practice.

Safety-II had to be called in advance of its popular development in order for it to come into existence at all. We are still coming to understand what Safety-II is. We will develop a better understanding of these as time goes on. This requires studying ordinary work, modelling the system, being proactive, as well as investigating unwanted events. By and large, many of the methods for that are there already and have long been in human factors, ethnography and social science generally e. Another cry is that Safety-II was already here; that it already existed in various forms, for instance, in certain types of safety assessment, safety observation schemes, safety investigations, or in other guises in previous academic papers and talks.

Again, the writing on Safety-I and Safety-II does not deny that some elements of it are already in place. These developments often indicate clear progress, but the examples are not usually instantiations of Safety-II, and need not claim to be either. They do not form sets of assumptions about people, work, systems, safety and management, which cluster together as relatively coherent ways of thinking, and therefore acting.

Some feel that Safety-II is an affront, or even a threat, and that what they do which, interestingly enough, is what they think Hollnagel is talking about has been unfairly characterised. Most of my work has been in Safety-I, so I could feel this too — if I chose to. The writing on Safety-I, however, is about a particular way of thinking about safety characterised by a pattern of common assumptions.

What are claimed to be technical issues are often more personal. Walter Bagehot, a British journalist and writer editor-in-chief of The Economist , put it this way in This, to me, is not a well thought-out claim. For a start, if Safety-I thinking, data, methods and products were so flimsy that they could be blown away so easily by seeing things from an alternative perspective, then they deserve to be.

Second, most safety work has been, and will be for a long time, done through the lens of Safety-I. So what is the problem?


This is reinforced by, and reinforces, personal, social and system barriers to new thinking. I prefer to see Safety-I and Safety-II as an alternative ways of seeing, understanding and acting for different purposes and situations.

Safety-I and Safety-II: The Past and Future of Safety Management.

It is also, in a sense, a very good marketing tool, as many other terms for the same set of ideas would not have attracted interest. Of course, in the efforts needed to encourage a new way of thinking, there has to be some clear differentiation. Humanistic psychology had to express itself not as a subtle evolution of behaviourism or psychoanalysis, but as a very different way of seeing. There also has to be some promotion — some concerted effort to express and spread new thinking.

But we need to resist the idea that one worldview is fundamentally better than another. I would not want to fly on an aeroplane which had not been subject to a thorough Safety-I analysis. But similarly, and increasingly, I would not want to be on the receiving end of a human system or socio-technical system that was designed and managed only from a Safety-I viewpoint.

My theory of people, work and systems influences what I want from systems. Some of the phenomena that we observe in the world today — a very different world to that from which traditional safety management emerged — cannot readily be interpreted through a Safety-I lens. In a sense, it can seem better not to see — out of pure or wilful ignorance — than to see but not understand…or know what to do. But if our worldview does not help us to make sense of the world, we can look elsewhere. Meadows listed paradigms in her 12 leverage points to intervene in a system.

These include, moving toward the most powerful end of the spectrum: … 6. As she refined her ideas, she came upon one leverage point that was greater than paradigms — 1. On this, she stated:. It is to let go into Not Knowing, into what the Buddhists call enlightenment. People who cling to paradigms which means just about all of us take one look at the spacious possibility that everything they think is guaranteed to be nonsense and pedal rapidly in the opposite direction. Surely there is no power, no control, no understanding, not even a reason for being, much less acting, in the notion or experience that there is no certainty in any worldview.

But, in fact, everyone who has managed to entertain that idea, for a moment or for a lifetime, has found it to be the basis for radical empowerment. It is in this space of mastery over paradigms that people throw off addictions, live in constant joy, bring down empires, get locked up or burned at the stake or crucified or shot, and have impacts that last for millennia. There remains a need, then, to stay above different safety worldviews. Firstly, we cannot be certain of any. Theory Y has been subject to manipulative managerialism. While Safety-I conceives of the human as a hazard, Safety-II conceives of the human as a resource; but this view is not immune from manipulation.

We need self-awareness to recognise our own mindset, wisdom to see its limits, and mentally agility to choose another when appropriate. This means we have to try to remain unattached. Transcending paradigms allows us to choose a worldview that fits the needs of the situation. In safety, similar sorts of considerations will come into play, including the system under consideration, the needs of stakeholders e.

For complicated mechanical systems, a Safety-I view may be most appropriate. This strategy fits neatly with the radical and innovative ideas on safety culture presented by human factors expert Erik Hollnagel. Safety-I and Safety-II basically represent different philosophies of safety culture. In Safety-I, safety management is reactive: the goal is to achieve the lowest possible number of events going wrong.

Safety-II is more focused on being proactive: it looks at where and how things are going right and is far more accepting of the variability in human performance. Confidential reporting is firmly aligned with the Safety-II philosophy. Confidential reports and the intelligence surfaced about safety and reporting culture at the time of interview play an important role in helping managers take a proactive stance towards emergent risks.

If we want to shift a safety culture from a reactive to proactive mindset, we first need to ascertain how a given culture is perceived by the employees who actually experience it on a daily basis. This is where the new CIRAS data may be able to provide an important indicator of the health of the underlying culture. The responses to the questions asked in CIRAS interviews presented overleaf make for an interesting read. There may be a concern that these results could be distorted because they are solely from employees who already feel their safety concerns remain unaddressed.

However, it is likely that a similar pattern of findings would emerge from a sample population of employees who have not previously reported to CIRAS.