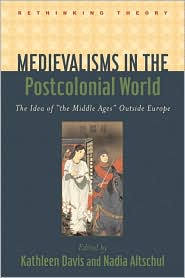 Many Early Modern thinkers saw this contamination, too, in medieval chivalric romances and other medieval narrative forms.


The nations of Europe, according to Geraldine Heng, began to coalesce in the medieval period. European senses of nationhood, in part, configured European identity and determined its colonial-era conduct. Heng discusses this inchoate nationhood with specific regard to England. She examines how, in order to create the idea of nation, many differences among people within England had to be elided, just as similarities among "Others" outside the nation or outside the nation's sense of self had to be created or analogized. Medieval Europeans profoundly misunderstood, reduced or ignored facts about Islam, as they had done about Judaism before it, in order to perpetuate about both religions the slander that they were idolaters, pagans, well-poisoners and baby-killers.

All Others, regardless of their actual differences, could stand in for one another within the medieval European notion of identity. This proclivity for analogizing Others appears in post-medieval European treatment of colonized peoples as well. Whether the colonized persons were Maori, Ojibwe or Australian Aborginal, the initial and most important identification marker as far as European discourse of the period was concerned was their non-Europeanness where Europeanness equated to civilized, Christian and white.

In this way, colonial European discourse at its most basic elided the differences among vast numbers of the colonized, asserting that colonized people's primarily pertinent quality was of being not European. Moreover, it superimposed over colonized people the binary thinking of European colonialism, which offered but one European-based definition of what constituted, for example, "civilization," "culture," or "wisdom" and attributed all other definitions or practices to the lack of "civilization," of "culture" or of "wisdom.

Medieval scholars loved to split hairs and resolve oppositions. But not all minds in any age function with the subtlety of Boethius or Abelard.

In practice, binary thinking often becomes oppositional and creates a conflict of power. Where power becomes truly entrenched, as with the medieval church or European royalty and their burgeoning states, it seeks to perpetuate itself and does so usually at the expense of its relational opposite s in a zero-sum game. In the Middle Ages or in medieval historiography or, perhaps, in both one can identify several relational oppositions. The binary of church and state figured prominently in any number of conflicts from the Investitute Controversy of the eleventh and twelfth centuries to the even longer-lived factional struggles between the Guelphs and Ghibellines.

This binary seems so important to our historical vision of the period that, arguably, its resolution in favor of the state by the Protestant Reformation and by Henry VIII's separation of the Church of England from Rome signalled the beginning of a new historical age, the Early Modern. The binaries Christian and non-Christian, as previously mentioned, also played an enormous role in the relation of medieval Europe to non-Europeans, but equally importantly of medieval Europe to European non-Christians.

Perhaps the oldest binary in the book, male and female, enjoyed a particularly virulent heyday during the Middle Ages as well. In any event, medieval thinkers and rulers not usually the same people loved to play us-versus-them and good-versus-evil in exactly the manner that would tick off Friedrich Nietzsche odd years later. Appropriately, perhaps, Early Modern Europeans applied binary thinking to the very Middle Ages whence they seem to have derived this zero-sum method of cultural valuation in the first place. In other words, unsophisticated binary thought, seemingly employed so diligently in the Middle Ages, was used by colonial-era Europeans to refer to the Middle Ages.

It has been primarily useful in dispensing with the notion that the Middle Ages comprised some sort of historical aberration or void, that Early Modern Europe bears closer resemblance to the pre-medieval classical world than it does to its directly antecedent time period.

Repopulating the medieval world with contingency, complex power struggles, and resistance may, in turn, inform our vision of the colonial era that followed on the heels of the Middle Ages. European historians as opposed to postcolonial historians may, finally, begin to seriously dismantle the binary thought and categories that still wind through Western scholarship 1 John M. Unless otherwise cited, all referenced articles are from Cohen, Jeffrey Jerome, ed. New York: Palgrave, The many colonial powers of Europe neither instituted identical policies in their colonized regions, nor did any single colonial power in every case approach the governance of its colonized people in precisely the same way.

European colonialism can be most usefully thought of, perhaps, as a trend or dynamic or rhizome, after Bill Ashcroft rather than a monolithic policy or institution of any kind. That said, the overwhelming majority of policies, institutions, behaviors and practices that constituted European colonialism reduced the colonized at the expense of the colonizer and analogized colonized people with one another, first and foremost, as non-European read non-Christian, non-white, uncivilized, etc. For a thoughtful and textured defense of binary thought read this. Petrarch apparently first coined the term to refer to the period of relative instability and chaos following the decline of the Roman Empire, but post-medieval historians and, later, common "wisdom" used the term to refer, rather snidely, to the Middle Ages in general.

Of course, Petrarch also first referred to the period, his own or at least its cusp, as "middle" or medium in Latin, carrying pejorative connotations of muddled, nondescript, "squalid. Oct 11, Rochelle rated it really liked it Shelves: essays , readforschool. This book is so cool!

Summary "This collection of original essays is dedicated to exploring the intersections between medieval and postcolonial studies. Ranging across a variety of academic disciplines, from art history to cartography, and from Anglo-Saxon to Hispanic studies, this volume highlights the connections between medieval and postcolonial studies through the exploration of a theme common to both areas of study: translation as a mechanism of and metaphor for cultures in contact, confrontation and competition.