Only 50 years ago, Mr. Patterson reminds us, the United States was a very different place. The population contained a small and declining number of foreign-born, the result of strict immigration quotas installed in the 's.

Ellis Island would close for good in Most blacks still lived in the South, where racial segregation was the law. Blue-collar workers outnumbered white-collar workers, and labor unions, led by charismatic figures like John L. Lewis and Walter Reuther, were at the height of their power. The first Levittown had yet to be built. Few couples got divorced. There were no supermarkets or shopping malls, almost no four-lane highways or air conditioning, no television or ball-point pens. More than half of the nation's farm dwellings had no electricity.


Traditional values were strong. Most Americans believed deeply in the virtues of organized religion, hard work and self-help. Yet their experiences in the Great Depression and World War II had made them more accepting of other ideas -- like a government safety net for the truly disadvantaged and a foreign policy that stressed serious and sometimes expensive involvement in places far from home.

What worried most Americans in was the return of hard times as defense spending dropped and factory jobs disappeared. Could the United States handle the difficult reconversion from a wartime to a peacetime economy?

These worries did not last long. As Mr. Patterson demonstrates, a combination of factors, including generous mortgage and college benefits lavished upon returning veterans, a surge of consumer demand after years of war rationing and the pathetic state of international competitors like England, Germany and Japan made a postwar depression almost impossible, a relic of the past.

Patterson writes. Prosperity brought "grand expectations. For the millions below them it meant economic opportunity and expanded political rights. Covering enormous ground, Mr. Patterson weaves a narrative that includes everything from the battle against polio and the meaning of Alfred Kinsey's sexual studies to the rise of McCarthyism and the struggle for civil rights. Yet absent from "Grand Expectations" is the role of popular culture in American life.

There is little of importance about movies or music, and almost nothing about sports. The book also ignores regional change, leaving Sun Belt and Far Western growth largely unexplored. Patterson is particularly adept at explaining the long-term consequences of events that have faded from public memory.

In discussing the Korean War, for example, he reminds us that President Harry Truman set a modern precedent by sending American troops into battle without consulting Congress; that defense spending more than tripled between and , rarely to fall again; that General Douglas MacArthur's insubordination served to reaffirm civilian control of the armed forces; that Chinese Communist involvement in the war forced the United States to guarantee Taiwan's future security; and that total victory -- an American tradition -- is not always possible in the modern, atomic world.

Patterson's judgments are in line with the most recent scholarship of this era. Harry Truman is portrayed as a determined New Dealer and a tough anti-Communist who adequately filled Franklin Roosevelt's shoes. Dwight Eisenhower comes across as a strong, confident leader, committed to fiscal conservatism and limited government, yet determined to keep New Deal reforms mostly in place.

John Kennedy is viewed as a fierce cold warrior, intensely competitive, with little interest and few accomplishments in domestic affairs. Lyndon Johnson is described as a "bread-and-butter" liberal who unwisely measured success in quantitative terms, from the number of people receiving new benefits to the number of North Vietnamese lying dead on the battlefield.

To explain the Iranian hostage crisis or women's liberation requires different skills -- perhaps a different mode of writing -- from the kind needed to put in perspective the impeachment of Bill Clinton, which is still widely viewed through partisan lenses, or the s rush to economic globalization, the implications of which remain as unclear as ever. In crafting their tales, the authors inevitably make some similar choices. Besides spanning almost identical periods -- with the early s nadir of Watergate, Vietnam, and stagflation providing a natural starting point -- their books also sound common themes.

As the earlier volumes recounted liberalism's postwar ascent, so these focus on conservatism's ensuing rise: the cultural backlash, the tax revolt, Ronald Reagan, resurgent evangelicalism, the Republican takeover of Congress. 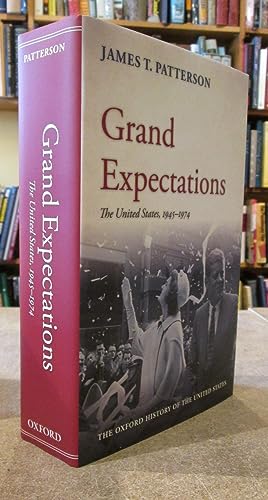 Notably, both of these volumes give lesser prominence to the Cold War, perhaps because hindsight has revealed that the Soviet Union was moribund by More disappointingly, both largely omit literary and cultural developments, except to illustrate social trends such as the increasing visibility of sex. More interesting than the predictable resemblances of these accounts are their striking differences. Discrepancies in emphasis, style, and especially argument underscore that contrary to our intuition, writing history is not a passive feat of discovering meaning but a purposeful act of creating it.

With an inescapably subjective lens, a historian must aggressively gather and select data, fashion a narrative, and wrestle with the material until it coheres as a piece of writing that is literary, cogent, and, of course, accurate. Hence, two different approaches to mastering the recent past emerge in these books. Detached, dispassionate, and drawn to detail, Patterson writes in taut, vivid language, and with illustrative examples on every page.

He keeps his judgments terse and defensible. More overtly opinionated, Hodgson tends toward speculative generalizations and quirky insights; at times he waxes repetitive, rambling, and random in his choice of information to include. Above all, the two historians offer starkly divergent assessments of the state of affairs in lateth-century America. Generally bleak, Hodgson fastens upon the unheralded persistence of inequality in American life -- of wages, income, and wealth.


For all the talk of economic revival under Reagan and again under Clinton, Hodgson notes, real wages in remained 10 percent lower than they were in Patterson, though no Pollyanna or celebrant of unrestrained capitalism, might well group Hodgson among the theorists of American decline whose dour critiques, he notes, recurred like clockwork throughout the last 25 years. Indeed, the enduring fear of the deterioration of American life, even in good times, constitutes one of Patterson's major and more original themes. While granting the accuracy of some of these critiques -- Patterson dwells intelligently not only on the widening gap between rich and poor but also on such intractable problems as the urban crisis and the sorry state of public schools -- he more often accentuates the positive.

Many social and cultural conflicts, loudly contested by partisan political antagonists and given exaggerated play in the media, turned out to be neither so profound nor so implacable as they seemed. And we can't stop complaining about it. Fueling this unprecedented -- and unappreciated -- growth of personal autonomy, Patterson suggests, has been the revolutionary expansion of rights that he identifies as another hallmark of the age. As in Grand Expectations , he steers attention to the fitfully expanding opportunities for women and minorities, the controversial relaxation of puritanical social codes about sex, and the newfound if limited toleration of once-taboo lifestyles.

Even while noting this bounty of material goods and personal liberty, Patterson describes at length and without partisan editorializing the fierce political wars of the century's final years. Quickly but thoroughly he reviews the Clinton impeachment and George W. Bush's successful bid in to short-circuit the recount of Florida's presidential votes that probably would have shown Al Gore to be the election's rightful winner.

While evenhandedly reporting both sides' arguments, Patterson still manages to convey a sense of the opportunism behind these efforts. And though not untroubled by their grubbiness, he minimizes their import.