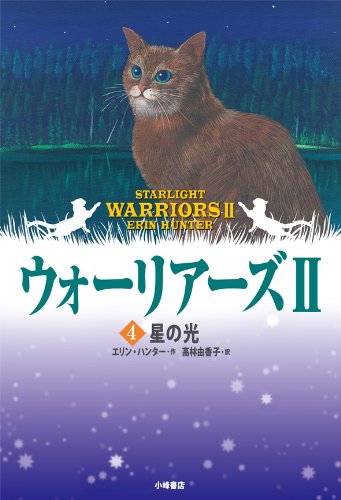 Meanwhile, back in the forest, Firestar and Leafpaw watch ThunderClan's world crumbling around them. Will the questing cats make it back in time to save the Clans, or will they be too late? The young feline heroes of The New Prophecy have finally made it back to the forest—but their quest is far from over. Now they must convince the fiercely independent Clans to travel together to a new home, through dangerous territory and without a clear destination.

If they do not, their world will be destroyed, and the Clans will be lost forever. Before there is peace, blood will spill blood, and the lake will run red. The gripping adventure that began with a small housecat in Into the Wild continues with Book Four of the thrilling Warriors spin—off series The New Prophecy.

These cats' devoted fans have catapulted them onto national bestseller lists, and the support for the series grows stronger with every book. Now the warrior Clans have finally reached their new home, but their troubles are far from over. Don't miss the next adventure of Brambleclaw, Firestar, and ThunderClan in Starlight, featuring new maps of the Clans' unfamiliar territory at the front. New territory brings new troubles for the fierce cats of the warrior Clans.

Dangers they have never faced before are lurking in the twilight shadows, and former allies are acting strangely hostile. As divisions between the Clans grow deeper, Firestar's daughters face troubling decisions.

The future seems uncertain, and more than one cat is harboring sinister plans that could lead to violence and darkness. As all the warriors wait for a sign, some of them begin to realize that the threats they face in the forest may not be as perilous as the threats they face from within. What did you love best about Starlight? As a devoted Warrior cats or Warriors, as it was later renamed to , This review may be biased.

One thing I love about the series in general is it's amazing and in-depth story arcs, and this book definitely lives up to my hype about the series. It is a major turning point in the entire series and it was handled perfectly; the characters' reactions, worries and excitement about their new home was right on and I could definitely empathize with them all.

Who was your favorite character and why? It's hard to pick a favourite character as every single one of them is so[ unique and interesting. But if I was going to choose, I would say Brambleclaw and the way he was handled particularly stood out to me. We got to see his struggle with separating from the original cats from the journey to the sun-drown place in detail, his craving for power and the uncertainties that came with it as well as how he struggles with knowing that Hawkfrost is his half-brother and that Squirrelflight doesn't trust Hawkfrost at all; and subsequently, the tension that comes between them.


How does this one compare? I have not seen any of her other readings yet, as not many of the Warriors books are audio books as of yet, but I'd be glad to do so when I can. This one is great, it's clear and well spoken. The only issue I have with it is that some of the voices of the characters don't sound right, but then again, I don't expect her to be able to do a perfect male voice.

Overall, it was great to hear my favourite book series get a reading as great as this one. Was there a moment in the book that particularly moved you?


There wasn't a time in the book that didn't move me; it is amazing. Any additional comments? I would love it if more of these books are turned into audiobooks in the future, be it by Nanatte, or someone equally as talented. I would recommend this to anyone. As people often say, this series doesn't seem to appeal to just one audience; it's a cat story, so you would assume it's for children, but it has quite a bit of gore and some genuinely adult and familiar themes which could point towards teens or above.

So I would recommend it for people who love adventure, a bit of gore at times or love cats, like I do. I mean, I have all the stories, and now I can listen to them, too! Just think how proud you'll be, when you listen to it too: "I listened to something spottedleaf did.

Oh my! Oh, and this is Unabridged. The beginning is the best part, because as it nears the end, there are huge fights going on with Brambleclaw and Squirrelflight. They may not be my OTP, but I don't like it when they quarrel.

I liked the book, but the reading could be better. My the stars light your path. Thank StarClan for this. I really loved this book. This is a good book for everyone!!! I really suggest you listen to the book. And to listen to all the others!

Why did they choose a different narrator from the first 6-book series? It is very jarring to go from MacLeod Andrews to this person. Its really unbearable. As always the the story is great! I did, however have a bit of trouble getting used to a woman's voice performing. As an animal lover, I'm a sucker for animal stories.

This story, and I suspect the others in the series, aren't even in the same league. Not even close. As I listened, I kept trying to figure out who it might be written for. It must be directed at folks who like to make up words for common things. Jeez Louise!